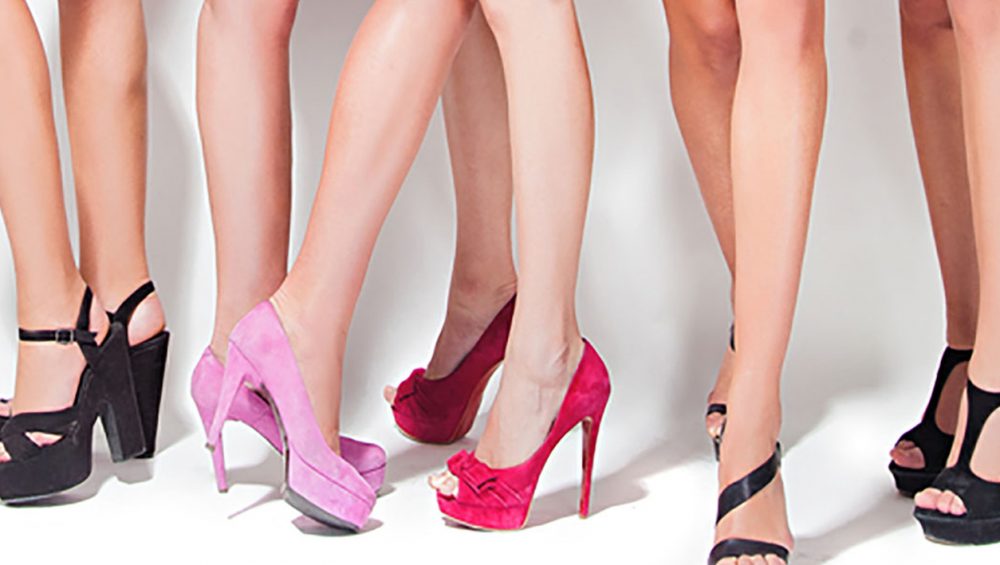 Wearing stilettos can add height – as well as boost your confidence. But medical research is showing that wearers pay a hefty price as they grow older.

The number of people suffering from Morton’s neuroma (an extremely painful foot injury) has more than doubled in the past ten years, with experts blaming high heels. Women are up to ten times more likely than men to suffer from the condition, which is thought to be caused by years of wearing high-heeled or ill-fitting shoes. The largest group of sufferers are women aged between 40 and 69.

Among this group the incidence of Morton’s Neuroma more than doubled (up by 115%) between 2004-2014. Morton’s Neuroma is a common problem which affects a nerve between the toes. Fibrous tissue develops around the nerve and becomes compressed, causing pain.

Sufferers say symptoms range from feeling like there is a pebble inside their shoe to pain similar to walking on razor blades.

The condition affects the nerve that runs between the toes. Fibrous tissue develops around the nerve and it becomes compressed, causing pain between the toes that has been described by some as “walking on razor blades”. It can be brought on by years of wearing high-heeled or ill-fitting shoes that push the toe bones against the nerve. The NHS has warned that high-heeled shoes over 5cm can be particularly problematic.

Andrew Craig, orthopaedic research fellow at Bradford Teaching Hospitals NHS Foundation Trust, who has researched the problem says: “We have known for a long time that the condition seems to predominantly affect females of a middling age, with speculation that high heels and other such tightly fitting and unnatural footwear — despite looking fabulous, I’m sure — may play a role.

“Increasing awareness of Morton’s neuroma can only be a good thing, not least because numbness in the foot could be a sign of other, potentially life-altering conditions, such as diabetes.”

He looked into how well treatments for the condition worked, including using insoles and steroid injections, finding that 55 per cent of patients required surgery. This involves decompressing the nerve by cutting between the affected toes. It can involve completely removing the nerve, leaving the patient without feeling in that area.

“Out of 30,000 podiatric surgical procedures in the UK each year, around 10 per cent are for neuromas,” says Trevor Prior, a podiatric surgeon at the Homerton Hospital, East London. A recent study of a podiatric practice in the US showed that of 4,000 patients, nine per cent were diagnosed with neuroma.

The incidence may be much higher because, according to podiatric surgeons, GPs are not trained to recognise neuromas and many are missed. Steve Kriss, a consultant podiatric surgeon at Battle Hospital, Reading, explains. “Often patients are sent for an X-ray which shows nothing, since only ultrasound or MRI shows up tissue. So they return to their GP, who may tell them it is metatarsalgia — which is just the medical term for generalised pain. They then go away and put up with 20 years of agony. I see women who have been walking around for years in pain who have just put it down to getting older. They cannot believe the relief when they finally get treatment.”

‘Figures from the national audit of the Association of Chiropodists and Podiatrists show
that about a third of patients find that the condition improves if they wear insoles.’

Nobody really knows why neuromas occur, but the message from podiatric surgeons is to get help sooner rather than later. “By the time I see patients, conservative treatments such as orthotic insoles or cortisone injections simply don’t work,” says Prior, who is also convinced that neuromas occur because we generally abuse our feet, including wearing unsuitable footwear — 90 per cent of the patients he sees are in the wrong-sized shoes — which he believes aggravates this type of neuroma. “I do think that many of my patients’ feet have been suffering ongoing low-grade trauma.”

Scientists have long warned about the dangers of high heels. And now, a new study has shown that women who wear high heels risk ankle damage after three years of regular wear.

At first, wearing heels of about 10cm (four inches) will strengthen some ankle muscles. After this initial period, which lasts from one to three years, women will become more at risk from strains and are more likely to lose their balance. According to the study, which appears in the International Journal of Clinical Practice, the initial period leads to the four main muscles in the ankle becoming stronger and more dominant. The other two muscles, however, become weak.

Recent studies have shown that the number of ankle injuries caused by high-heeled shoes has doubled in some European countries over the past decade. Their use can also lead to deformed feet and back pain.

Dr Yong Seok Jee, of Hanseo University, South Korea, who led the study, said: “As high heels are in fashion and sometimes required for certain professions, many women may be unaware of the extent to which it may be weakening their ankle strength and dynamic balance. Eventually, major accidents such as falls and serious ankle sprains can result.”

He said that there were a series of exercises that women could do to mitigate the effects — or they could simply choose not to wear high heels.

The exercises include towel scrunches, where a towel is held within the arch of the foot and released, heel raises, toe tapping and heel walking. Dr Yong said it was “clinically important for wearers of high heels to regularly perform ankle strengthening exercises”.

Exercises to strengthen your feet if you wear stilletos

Sign in Create an Account
Lost your password?
Select the fields to be shown. Others will be hidden. Drag and drop to rearrange the order.
Click outside to hide the compare bar
Compare
Shopping cart close